So I recently got a new phone and thought I’d share my thoughts on how I tried to be an environmentally conscious consumer. I would like to say this did satisfy my frugal side as well. Because of how expensive phones are becoming I’m no longer buying a new phone through my provider. Although I work in a tech environment, I personally don’t feel the desire to have the latest and greatest phone out there.

There’s many ways people can buy a used phone. You can go on any resale site like ebay and there’s thousands of phones to choose from. However, there’s also a risk when you do this. You don’t know the other person buying the phone and therefore are not guaranteed what the pictures or description are telling you. At first I did attempt buying a phone through Facebook Marketplace. I did my research and asked certain questions about the phone. It even got to the point where I was going to meet up with the person, but unfortunately I wasn’t quick enough and they were able to sell it to someone else the very next day.

I wasn’t in a big rush as my phone was still functioning, but it was clear that my battery was a big problem by randomly shutting down and draining 25% when I’d use my camera.  I learned to carry my phone charger or an extra charging pack on my at all times. Because newer phones are being made to be disposable, I couldn’t just easily swap out the battery for a new one like my last phone. I would have had to take it to a store that would charge me just as much to replace the battery as it would for me to find a “new” used phone. This is where my frugality took over. I didn’t want to just replace my battery, because there’s bound to be other issues popping up shortly (again planned obsolescence). I’d already had my phone for about 4 years, which in tech years is ancient.

I went back to the drawing board, aka Reddit, and someone shared a website called Swappa. They offer all sorts of ‘newish’ tech like phones, cameras, watches, etc. The more I looked through the site, the more I liked. It wasn’t as cheap as the Facebook Marketplace phone, but it was less hassle. Swappa makes sure the sellers are legitimate and you can look for a specific carrier.

I was able to find not only a barely used phone for less than half of what it would have cost me new, but I was able to buy from a semi-local company. The company I bought my phone from was only a few states away. The phone was already produced and shipped from the other side of the world, but I was conscious of trying to lessen the impact of ordering something from halfway across the country. I ordered and it was delivered within a week. Even part of the packaging was low waste. They used shredded paper as filler for the box. I didn’t need another cheap headphone and headphone covers that you’d usually get in the box. And it was already charged. I brought it to my carrier and they were able to set it up in less than 20 minutes. 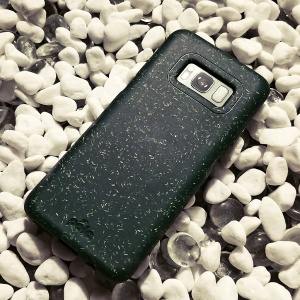 As for the phone case, I purchased a biodegradable case. Because while many people might be aware of how much resources and recycling is put into their phones, phone cases also create lots of plastic. The company I bought my case through is Pela, which not only makes cases but other accessories as well. While the case itself is biodegradable, the company also donates a percentage of every sale to Ocean Cleanup and Preservation Initiatives. It’s coming from within the US, so it’s somewhat locally sourced. They also ship in very minimal packaging. I’m not sponsored by Pela (although I wish I was), but you can read all about them more on their site here.

So that’s my story about buying a used phone and hopefully it helps you the next time you need a new phone. Please consider buying your next phone gently used rather than new. It’s a great way to help the environment and save a few bucks.